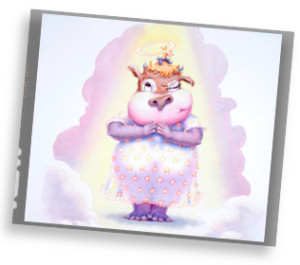 Rita Roberts lives and works in the San Luis Valley of Southern Colorado, surrounded by the cycles of the upper Rio Grande, which flows a mile from her studio. Born in Nebraska, the artist still gravitates toward farmsteads and big, stormy skies. Her subjects exist in the mountain west, near the Continental Divide, but her eye finds the flatlands; single trees holding their own against the wind; outbuildings that out-weather the elements of nature.

She started her undergraduate studies at the Minneapolis  College of Art and Design and received a BFA from the Kansas City Art Institute in 1987. Rita earned an MFA in Illustration and Screenwriting in 2014, from the Academy of Art University in San Francisco.  The years in between have been spent gaining recognition in the fine art world.

Rita is now shopping her picture book for early readers, Augustina, a humorous story about a lovable, barnyard oddball who dances her way into the carnival spotlight, and discovers her true identity.

Roberts’ paintings have been featured in Southwest Art Magazine, American Art Collector, Focus Santa Fe, and The Artists’ Magazine. Burton Silverman awarded her with second place for the landscape category of the 2004 art competition for The Artist’s Magazine. She was also a finalist in 2001, 2005 and 2013. Rita Roberts is a signature member of Oil Painters of America. Her work has been juried into several Salon International exhibits, as well as Arts for the Parks and Paint America traveling exhibits, and she was invited to show in the Colorado Governer’s Show in 2005 and 2014. She is currently teaching courses at Artists Network University.